What is the oldest brewery in America?

Like other stories of the first American immigrants, the founders of Yuengling settled in the United States looking for opportunity to build a legacy and lasting impression in their new home. The story begins with David G. Yuengling traveling from Wuerttemberg, Germany to settle in Pottsville, Pennsylvania. David established the Eagle Brewery in 1829, but a tragic fire destroyed the plant two years later. A new brewery was then established at its current site in Pottsville.

After David’s son joined him in 1873, the brewery name is changed to D.G. Yuengling & Son, which is its common name today. The brewery has been family owned and operating since its beginnings. But the company has had its struggles. When the eighteenth amendment was ratified, Yuengling was forced to switch production to near beer products, also known as non-alcoholic beers. They even opened a dairy to help survive prohibition. But when prohibition ended, they celebrated by producing “Winner Beer” and shipping a truckload to President Franklin D. Roosevelt. Winner Beer isn’t available today, but the family has developed a brand any beer lover knows.

The brand became so popular that the demand for Yuengling exceeded the brewery’s capacity, so in 1966 they decided to withdraw sales from outside the local area. The company built two additional breweries to help meet demand of the product, and by 2009, they surpassed 2 million barrels in production. Thankfully the product was expanded to Ohio in 2011, and this year, they will be coming to Indiana! 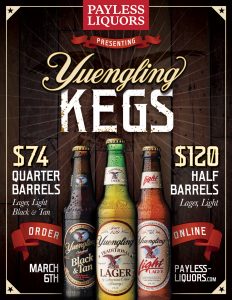 a shelves. Yuengling lovers in Indiana are ecstatic, and you can be one of the first to have your hands on some of this iconic beer. Through Payless Liquors, you can pre-order your keg of Yuengling and have it by March 6th! Check out our keg order form for more details and to order your keg today. Yuengling will also be available in bottles and cans in April. Stay up to date on Yuengling coming to Indiana on Payless Liquors Facebook, Twitter, and Instagram!

Sit back, relax, and grab a whiskey & soda. Payles