Avery Brewing Company, a pioneering craft brewery known for its all-encompassing obsession with beer, has introduced its Go Play IPA – a new year-round beer. Avery Brewing crafted the Go Play IPA as a celebration of those who do their thing, regardless of what it is, with the same all-in obsessive enthusiasm that they have for beer.

The Go Play IPA sports – as quoted by their website – juicy, tropical, and dank aromas, fueled by dry-hop additions of Vic Secret, Idaho 7, and Simcoe hops. The addition of sodium and potassium and the near-sessionable 5.5% ABV make Go Play the perfect beer to handle hot days without having to compromise on flavor.

Taking cues from the Michael Gose playbook, Avery Brewing Company applies the rounded salinity of that sour ale to the crowd-pleasing IPA. Activated with electrolytes and a sensible alcohol content, the Simcoe, Vic Secret and Idaho 7 hop fueled IPA brings a refreshing and hydrating beer vibe to athletics. 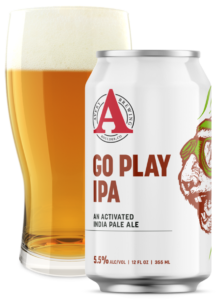 , Founder and CEO of Avery Brewing Co., said that this beer was the beer he’d been dreaming of creating for years. Outside of running the Boulder, Colorado, brewery, Avery spends a lot of his time rock climbing and mountain biking. He wanted to create a beer that was light and refreshing but didn’t skimp out on flavor. Typically, to create a sessionable beer that can be drunk on a warm day and not be incredibly dehydrating, it needs to be beyond light and borderline flavorless.

For Avery, this proposition was unacceptable. Like most people, living an active lifestyle needs a beer to tag alongside. Taking cues typically found in sports drinks, Avery concocted an IPA that not only felt refreshing but was also full of flavor.

Go Play IPA reaches more sessionable IPA status while ultimately becoming a pale ale with a stronger hop tilt. Dry, crisp and refreshing throughout, the beer closes with the promised and rounded salinity that plays lightly on the finish for a snappy texture but slightly fuller taste with a medium-long grip of hop bitterness on the throat.

Pale, golden, and hazy, the frothy ale draws in the nose with a host of tropical fruit, citrus, and herb. Gentle sweetness carries a nutty, lightly honied and caramelized taste that brings thoughts of trail mix and graham cracker. With the mineral-rich ale splashing against the middle palate, its refreshing tone takes hold with a hop-centric demeanor. Papaya, passionfruit and red grapefruit rise first, with orange, apricot and a strong herbal contingency coming in a moderately bitter late palate. A light briny solution intertwines with impressions of fruit juice for a hint of Pedialyte in the finish.

Be sure to stop by any of our locations and pick up a 12-pack of Go Play IPA today!

Sit back, relax, and grab a whiskey & soda. Payles