The fourth and final version in Old Forester’s Whiskey Row series has been released. The 1910 Old Fine Whiskey, a double-barreled whiskey, represents a specific point in Old Forester’s storied 150-year-old history. A fall fire that happened at the distillery in 1910 spurred a happy accident that led to the casking process that led to the Old Fine Whiskey.

Started in 2014, the Whiskey Row series tells the story of Old Forester’s one-of-a-kind history, highlighting significant milestones and innovations in production along the way. This series includes the 1870 Original Batch, a small batch bourbon pulling from three distinct warehouses, meant to reference founder George Garvin Brown’s original batching process; the 1897 Bottled in Bond, a small batch of barrels from one distilling season, in the same year, aged in a federally bonded warehouse for a minimum of four years; and 1920 Prohibition Style, which represents a barrel strength of the prohibition era when Old Forester was granted one of just ten permits nationally to continue being sold as a medicinal whiskey. The last of the series is the 1910 Fine Old Whisky.

Thanks to a Fire 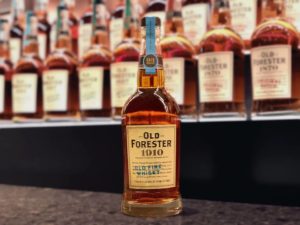 On one October day in 1910, a fire caused the bottling line to be shut down at Old Forester’s distillery for an extended period of time. To make things worse, there was a vat of mature whiskey waiting to be bottled. Instead of pouring out the whiskey or letting it sit until ruin, the distillers at Old Forester decided to store the vat in new, charred oak containers until the line could be repaired. This resulted in the first documented double-barreled whiskey, which was new for Old Forester and remarkable enough to become a new barreling method.

In order to replicate the 1910 methods, the distilling team took mature bourbon from their inventory and had it go through a second barreling process in a lightly toasted, heavily charred barrel. I was then bottled at 93 proof. At 93 proof, this whiskey is at the right weight to challenge the other Whiskey Row Series. Popular opinion has the Prohibition 1920 series as the favorite, but with 1910 coming out, there could be a new favorite of the series.

We have a limited supply of this limited-edition whiskey. Be sure to call us and reserve your bottle of this one-of-a-kind series.