“Swift in body and mind, Cheetah sprints ever forward. A blur of pure instinct. Buena Onda. Pure, crisp, clean, blissful simplicity. Savor this moment. All we have and all we need is now. Feel free and therefore you are free.” That statement can be found on every can of Cheetah Lager that comes out the Cincinnati, Ohio, -based brewery.

The idea behind this beer was to create a sessionable lager that was perfect on flavor, but not too dominating to prevent drinking in copious amounts. The beer is 4.8 percent, and as the can says, it’s bright, clean, and simple. There’s an underlying citrus pop to the beer that creates a wonderful summertime/early fall drink that’s refreshing while still holding enough character to keep your palates entertained. 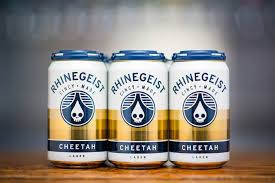 Cheetah is fairly new to the Rhinegeist stable – as in it just came around this summer in a limited fashion. But, this beer struck a cord quickly with Rhinegeist visitors. And by struck a cord, we mean how can we get this beer outside of the brewery.

History Behind the Lager

Being a lager, Rhinegeist’s Cheetah is ahead of the curve as lagers are becoming the next big thing with small to mid-sized craft brews. Breweries are looking to the past and the way things used to be done to draw inspiration for flavor and process. Back in the day, there was no temperature control, so beer would often be allowed to ferment in cool cellars or caves. The beer yeast adapted to this, hence the evolution of the lager strain of yeast – known as Saccharomyces Pastorianus.

More about the beer:

Overall: A clean, crisp, yet flavorful craft lager that falls squarely in the Rhinegeist wheelhouse.