Have you ever come across a case of Shiner Bock or anything out of the Spoetzl Brewery and thought to yourself where it came from? To answer that – a tiny town in the middle of Texas occupied by 2,069 residents. This little Texas town ships around 7 million cases of Shiner Beer to 49 states every year and has been around since the turn of the twentieth century and continues to grow.

By 1914, Shiner was gaining traction throughout its Texas community and was looking for a brewmaster. Enter Bavarian-born Kosmos Spoetzl, a one-time soldier who had trained as a brewmaster in his native Germany. Part of the package that lured Spoetzl to Shiner was potential ownership of the brewery. In 1914, he co-leased it with Oswald Petzold with an option to buy in 1915, which he did, giving the brewery his own name but continuing to call the brews Shiner Beers. Spoetzl had attended brewmaster’s school and apprenticed for three years in Germany, worked for eight years at the Pyramids Brewery in Cairo, Egypt, and then worked in Canada. He had moved to San Antonio in search of a better climate for his health, bringing with him a family recipe for a Bavarian beer made from malted barley and hops. 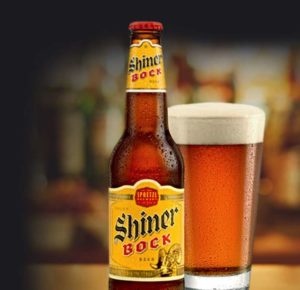 The most popular Spoetzl beer? Shiner Bock, hands down. Brewed since 1903, its crisp, clear taste and deep amber color combined with its light hop make it an ideal choice for any weather, but especially summer days. Crazy as it seems, Shiner Bock was only made during Lent for its first few years, produced seasonally. The people demanded the Bock year-round, and lifetime production was born.

Favorite of the Music Scene

Shiner has lots of ties to the Texas music scene. They hosted a major music festival dubbed “Bocktoberfest” from 1994 to 2006 and have dominated TX concerts since the ’70s. That domination started when the then-struggling company started up Austin distribution — initially by loading up some Austin-bound vans with Shiner and literally selling them out of the back to local beer enthusiasts. The brand blew up and became available for $1.50 at the legendary Armadillo World Headquarters, where acts ranging from Willie Nelson to Bruce Springsteen played.

To conclude, Shiner, though not the oldest family-owned brewery in the U.S. is a staple throughout America’s beer scene. Stop in today and pick up a case and throwback some good ole Texas brews.