As the darker days set in, we turn to darker liquors. We may even decide to treat ourselves to something special as we gear up for the long winter. Market research shows that whiskeys and bourbons consistently become more popular in the fall and winter months, and distilleries often capitalize on this by dropping new releases and limited editions at the end of summer. Check out these fall whiskeys to see which ones you should try!

What’s good for whiskey drinkers this fall? A whole lot, as it turns out! Here are some of the fall releases we’re most excited for. Click here if you’d like to reserve a bottle.

Eagle Rare 17 Year-Old is the highest-end product in the Eagle Rare line from the renowned Buffalo Trace distillery.  It’s aged in oak barrels, and the proud producers at Buffalo Trace say it has an “almost a wine-like character,” with spicy, nutty notes and a lingering quality.

Four Roses limited edition runs are over 114 proof, and the 2021 batch has four distinct bourbons to choose from: a 12 year-old, a 14-year old, and 16 year-old bourbons of two different formulations.

The historic King of Kentucky bourbon label was revived in 2018, and whiskey drinkers have been anticipating every release since. Head to Kentucky, Illinois, or Ohio if you want to find a bottle, as there will only be about 2,700 produced.

Little Book, a series of craft bourbons created by Jim Beam, has reached its fifth incarnation, and Chapter 5 has been branded “The Invitation”. The Little Book line has intrigued both Jim Beam fans and high end whiskey connoisseurs with its interplay between tradition and experimentation. “The Invitation” is perhaps a reference to whiskey drinkers being invited to expand their horizons with this unusual and complex blended whiskey. Little Book Chapter 5 contains four bourbons of various ages, as well as rye whiskey.

The 2021 version of Old Forester’s coveted Birthday Bourbon is a hefty 104 proof and has been aged 12 years. Budget-oriented whiskey drinkers will be happy to know that Old Forester’s standard line of offerings are also of a very high quality.

Our second entry from Buffalo Trace Distillery, Sazerac 18-Year, is a rye whiskey that has been aged for nearly two decades. Sazerac is named after a historic New Orleans coffee house that created an iconic cocktail using rye whiskey.

Each year, High West thrills whiskey lovers with a limited release of their highly regarded Rendezvous Rye that has been specially finished in French oak port barrels. This creates a complex and multi-layered beverage that pairs well with sips by the fire and warm fall flavors.

Barrel Strength is a somewhat experimental label from Penelope Bourbon. The distillery describes the Barrel Strength line as “push[ing] the boundaries of our signature four grain flavor profile” and it lives up to the claim. This year’s batch is a blend of three bourbons which have been aged in new oak for between 3.5 and 5 years.

While not a limited release, we wanted to give Angel’s Envy a special shout-out in this list for their Toast the Trees promotion happening this fall. Great bourbon requires oak barrels, oak barrels require trees, and trees require healthy forests. Angel’s Envy distillery in Louisville is stepping up to do something about it by asking us to #ToastTheTrees to help them plant a whole lot of white oaks this year.

Scotch and bourbon lovers are never at a loss for options, but if the cooler fall months have you in a funk, feeling burned out by that same old drink, now is a great time to branch out and try a Canadian whiskey. Canadian whiskey offers a smooth burn similar to bourbon with a flavor profile that is mellow and accessible yet capable of hiding layers of depth and complexity to rival your favorite scotch.

What Is Canadian Whiskey?

The history of Canadian distilling dates back to Quebec City in the mid-1700s, per the Canadian Distillers Association. The first distiller to produce proper whiskey in Canada is believed to be John Molson in 1799.

But the true history of Canadian whiskey predates all of that. Scottish immigrants initially made their whiskey exactly as they did back home, or at least as close as they could get given local resources, conditions, and available ingredients—an origin story very similar to those of Appalachia’s storied bourbons and moonshines. What we now know as Canadian whiskey evolved over the next two centuries from this rudimentary transplanted scotch, just like its cousins in the United States.

To fit the modern definition of proper Canadian whiskey, a product should be aged in charred oak barrels for three or more years. Most Canadian whiskeys contain rye but are not considered true rye whiskey (though some rye-forward products are specifically labeled and marketed as “Canadian rye”).

How to Drink Canadian Whiskey

When you’re first exploring Canadian whiskeys, simply take a small sip at room temperature and roll it around your tongue and mouth. Then, serve it to yourself at the bottom of a proper tumbler rather than in a shot glass so that you can get your nose inside for a good sniff.

Drinking it straight over ice or mixed with water are also excellent ways to trial new brands without masking the flavor.

They also make great mixers for the whiskey and coke or whiskey sour connoisseur.

Great Brands for a Budget

At Payless Liquors, we offer a number of high-end and budget whiskeys, and the budget brands offer good flavor while still offering a quality drink.

Windsor Canadian—A staple of taverns and man-caves throughout North America and the world, Windsor is a great entry point for people who want a prototypical Canadian whiskey experience without sacrificing quality.

Canadian Hunter—The iconic bottle design of a rugged hunter with his two imposing dogs belies Hunter’s bright, approachable flavor and almost sweet notes. Canadian Hunter is an excellent choice if you want the most whiskey for your dollar.

Canadian Club—Another brand you’ll find behind the bar at many a fine establishment, Canadian Club has a mellow, even-keeled flavor that makes it great for mixing or sipping over ice. (They also offer a 100% rye version on a green label.)

High-End Canadian Whiskeys for the Connoisseur

In addition to well-known national brands, many special releases, boutique products, and high-end brands make their way through the Canadian whiskey scene. Here are some to watch for:

Martell returns to its humble roots with the release of the new flagship product: the Martell VSOP (Very Superior Old Pale) Aged in Red Barrels. A cognac defined by its elegance and perfect balance of flavor, this recent Martell VSOP is available at Payless Liquors.

What Is the Red Barrels VSOP?

The Martell VSOP Aged in Red Barrels is a cognac that sports the distinguished title of VSOP, which Martell reserves for cognacs aged for at least five years. According to the cognac house, this specific VSOP originates from cognac aged in a fine-grained oak barrel that features a red hue, a result of the barrel’s aging process. These red barrels are also known as the “futs roux.” The spirit remains in the barrel between four to eight years, which creates the perfect amount of aging between the cognac and the barrel.

According to Martell Cellar Master Christophe Valtaud, he chose the VSOP Aged in Red Barrels as the new signature product to replace the previous title holder from 1960, the Martell VSOP Medallion. Valtaud wanted a cognac that is closer to the house’s iconic style, a sweet, balanced drink that holds mass appeal, especially among the younger demographic. Valtaud deliberately avoided the Medallion’s heavy, spicy notes, which originate from using a combination of older and newer barrels. The Red Barrels cognac is an attempt to pay homage to the iconic Cordon Bleu, while also moving the brand forward with something new and with its own mark. 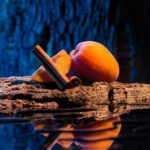 The Martell Red Barrels VSOP has the perfect combination of pleasing fruit flavor and aged wood overtones. The aroma of the Red Barrels cognac teases soft fruits such as cherry, plums and red grapes, alongside wood notes. A stronger scent of apricot follows, which sets up the spirit’s overall flavor. The taste of the cognac is a delicate blend of apricots, peaches, dried flowers, and red grapes, boosted by the sweet spices and oaky flavors that originate from the old, red barrels.

The balancing act of this cognac complements any type of food, from Western Asian, to spicy and non-spicy. Martell recommends this versatile spirit to create cocktails such as Le Voyage Des Amants and Maracuja Crush, though with the risk of diluting the gentle flavor of the VSOP.

One of the first cognac houses, Martell started in 1715 as immigrant Jean Martell’s trading business in the Cognac region of France. Martell’s use of grapes from the Borderie region and casks made from Troncais oak created the smooth cognac the house is known for. After Martell passed away in 1753, his widow and children greatly expanded the business to where it currently is today. The cognac house’s most famous product is the Cordon Bleu, to which the Red Barrels VSOP pay a tribute.

If you are interested in a cognac that strikes a perfect balance of fruity flavors and refined oak that is closer to Martell’s signature style, try out the VSOP Aged in Red Barrels. This spirit has a measure of 40% ABV and is available at Payless Liquors for $42.99 per 750 mL bottle.