It’s summertime, so everyone’s indulging a bit, even those who don’t usually drink much booze. For us, it’s the summer of rum! The warm months are the ideal time to experiment with lighter cocktails that give something sweet and colorful to sip, even if you typically have a more spirit-forward drink in hand or something just on the rocks. Rum, easier to consume than other liquor, is a staple of mixed drinks and punch-like cocktails in tiki-style glasses. Here are some suggestions for varying your summer drinks:

Many famous drinks’ beginnings have been lost to time, yet certain libations’ legends have persisted. A few originated at hotel bars — the Singapore Sling, for instance, was created at the Raffles Hotel in Singapore. A tiny bit closer to home, bartender Harry Yee made the first pour of rum, Blue Curaçao liqueur (to produce the characteristic hue), and pineapple juice (as a reference to the Hawaiian form of pineapple — sweet and golden, with minimal acidity) in 1957 at the Hilton Hawaiian Village. The ideal celebratory beverage for a trip.

Sex on the Beach

This fruity cocktail may be the first alcoholic beverage many Gen Xers had in college (along with their introduction to the delights of schnapps). It was so well received that it has become a classic and is recognized as an IBA Cocktail. Sex on the Beach is traditionally made with peach schnapps, vodka, cranberry juice, and orange juice. If you are short of orange juice, the now three-component drink is known as Woo Woo. Fitness enthusiasts could compare Sex on the Beach to their favorite smoothie sans the blender.

In addition to white rum and coconut cream, which give the drink its dessert-like flavor, pineapple juice also makes a cameo in this sweet classic poolside cocktail. The Piña Colada is the national cocktail of Puerto Rico, whether blended or served on the rocks, even if its beginnings on the island are still up for debate. Most people credit the Caribe Hilton Hotel — the company’s first establishment outside the continental U.S. The classic Piña Colada is perfect for poolside, summer barbeques, or even an after-dinner sip.

The Mai Tai, Tahitian for “good,” was created during World War II at Trader Vic’s in Oakland, California, when soldiers returned to the United States with fascinating tales from the South Pacific. The initial inspiration for this timeless cocktail may even have started in the 1930s by Donn Beach. It has since become the signature cocktail of every tiki bar worldwide. The Mai Tai, which is still served at hotels and pool parties and is made with light and

dark rum, lime juice, orgeat syrup, and orange liqueur, symbolizes the mid-century obsession with exoticism. Adding a little pineapple juice can sweeten the deal if you’re looking to cut down on the boozy taste.

Create Your Own Summery Rum Cocktails

Summer is a great time to break out of your comfort zone and try these classic rum drinks. With more access to exciting flavors, and a desire to experiment, you could create your spin on any of these traditional rum drinks and end up with a delightful signature cocktail all your own. Payless Liquors is here to facilitate your tasting journey, whether you’re looking to try something new or stick with an old favorite. With a wide selection of rums, you can’t go wrong with your choice of light or dark rum. Check out our impressive summer inventory of rum in-store. Happy sipping!

I am sure most of you have heard of and many have probably tried good old Admiral Nelson rum, but do you know about the real Admiral Nelson? This rum was inspired by Admiral Horatio Nelson, leader of the greatest armada to ever sail the high seas. They say that the admiral was fearless and lived life to his own beat, bold and full of flavor much like the rum inspired from him.

He was known for his genuine, heroic confidence and resilience. He was very much his own person and he didn’t let authority motivate him. They say that part of his infamy comes from ignoring the command to cease-fire. He “put a blind eye” to his orders, this is also where the famous phrase came from. Now, let’s talk a little about the premium spiced rum inspired by such a heroic admiral.

The nose is made up of light cinnamon and gingerbread notes, backed with vanilla. The body is sweet and pleasant, not overly spiced. It is the perfect rum for those who like just a little kick and is easy enough to just sip plain. The finish is short, straight and simple. This is a 70 proof rum. People enjoy this rum because they can drink it straight and not be put off by the burn. This is also a very tasty rum to add to mix drinks. Admiral Nelson Premium Spiced Rum is perfect for sipping straight and mixing drinks and it doesn’t break the bank. Get your bottle of Admiral Nelson today and be sure to follow along with our journey of Admiral Nelson and the Indianapolis Indians. Taste the Admiral. See the Indians. Cheers! 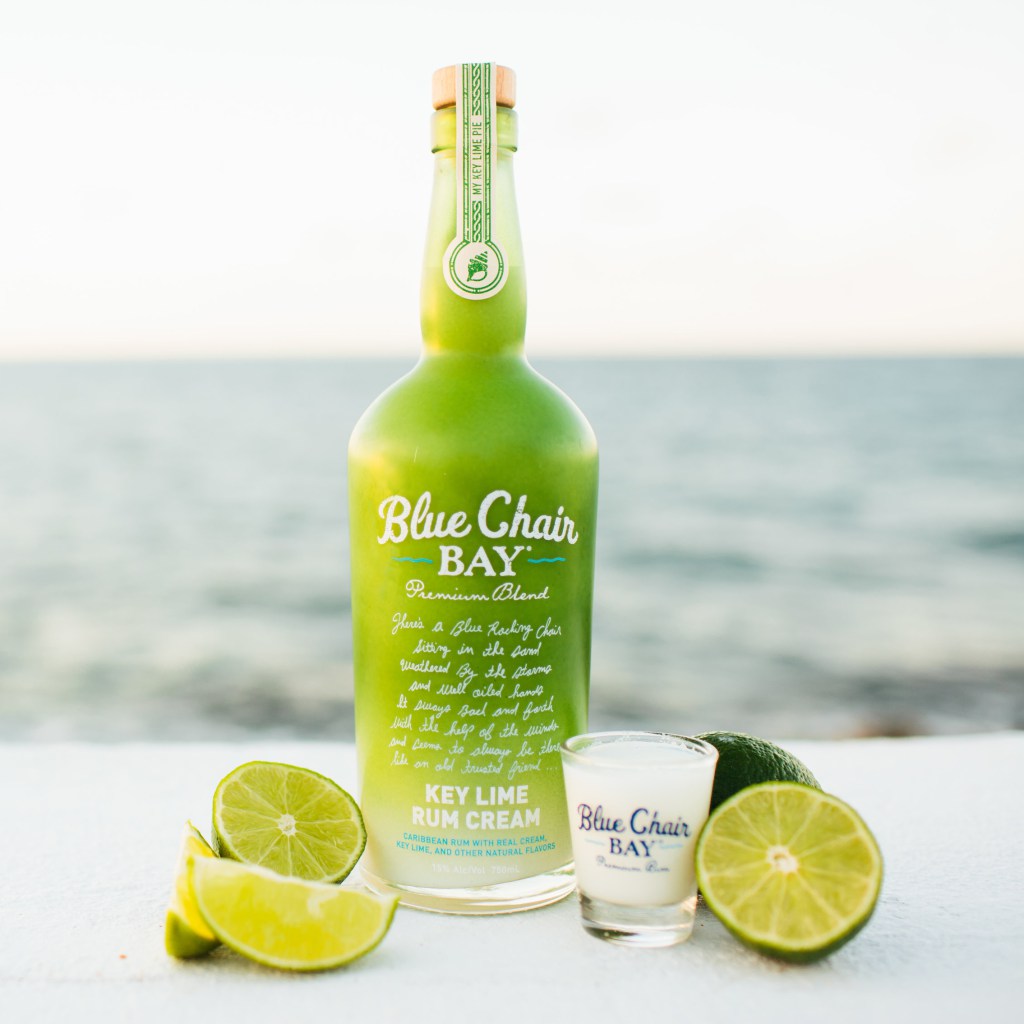 Imagine this – it’s 75 degrees on a perfect, sunny day. Your toes are in the sand and all you hear is the crashing of the waves against the beach. You got a nice cold Key Lime Colada in your hand to quench your thirst. Life is good.

With Blue Chair Bay’s newest flavor, Key Lime Rum Cream, you’ll forget that you’re wherever you are and feel like you’re in a tropical oasis of paradise and delicious drinks.

Inspired by the owner and creator of Blue Chair Bay, Key Lime Rum Cream wants to take you to island life. This tropical rum is best used in cocktails such as a Key Lime Colada. Here’s what you’ll need:

Blend all the ingredients together, and pour into a cup rimmed with coconut flakes. Garnish with a lime wheel and cherry.

In the mood for a deliciously sweet shot? Try the Keys with a Cherry on Top.

Chill the ingredients in a cocktail shaker with ice. Strain into a shot glass, and enjoy!

If you want to try it in other drinks, here’s a quick flavor profile for you. First, the nose. You can expect bright, fresh, and citrus aromas. The body is rich, buttery, yet well-rounded, as you would expect from a rum cream. On the palette, you can expect similar flavors to a key lime pie: fresh and tart. The Key Lime Rum Cream is balanced with a creamy meringue sweetness with hints of cinnamon, almond, and amaretto. On the finish, you can expect a rich graham cracker crust.

Mount Gay has been producing rum for over 310 years now and to celebrate, they once again entered a “black” space with their Black Barrel Rum. This small batch rum is handcrafted by blending two different varieties before allowing the blended rum to mature a second time, creating a bold yet balanced taste.

This one-of-a-kind process yields outstanding results. Each barrel has a slightly different taste, some have more wood notes while others lean closer to fruity. We learned this when we had the opportunity to meet Master Blender, Allen Smith back in July.

As the only retailer in Indiana given this opportunity, we were able to sample different barrels alongside Smith. After tasting many barrels, we all agreed which barrel we wanted to be ours. Our bourbon barrel rum was aged for 3 years in an “A” barrel in a distillery in the Brown Foreman family. It has since been bottled and delivered, ready for you to try!

The barrel we chose has a bold scent of spice and roasted wood. The taste is also bold and spicy, but balanced with vanilla and sweet caramel, making way for a long, warm finish. It was so good, we had to make sure it would make its way back to us!

Try it this weekend at our Bourbon Women Sip and Shop at our Greenwood Mall store and these other tasting dates: