Bulleit Bourbon is a household name for a reason. With a recipe dating back to the early 19th century, bourbon drinkers know Bulleit is smooth and spicy. It is a taste that’s entirely unique to the brand. Though the liquor itself is timeless and unchanged, the Bulleit brand is always finding ways to stay relevant. The most recent of these endeavors being the advent of the Bulleit Woody. It’s a vintage-inspired teardrop camper designed specifically to serve up Bulleit Bourbon.

Though the Bulleit recipe dates back to 1830, the company began in 1987 to revive the old family rye bourbon recipe. This unique blend of traits poises Bulleit to be a modern, viable company in the 21st century. Meanwhile, giving it the foundation of a timeless recipe with hundreds of years of development. Though its classic bourbon is still the most popular, the company has since developed other products. They offer a complete line of barrel bourbon, select blends, and ryes. Its core set of liquors has an incredible range of uses. The centuries of experience has allowed the company to develop tried and true recipes for its products, ranging from Whiskey Sours to Bourbon Swizzles to Old-Fashioneds.

Though it looks like a classic camper at first glance, the Woody is anything but ordinary. It features boasting artfully chosen wood exterior (more on that in a bit) and retro, white-rimmed tires. This camper hits you in the face with nostalgia at first glance. This first glance is enough to make anyone swoon. However, upon further inspection, it’s clear that this little camper is more than swoon-worthy. While the inside lounge area has the feel of a Kentucky cigar club, the real selling point is the outside. The back of the camper pulls out into a full-service bourbon bar. It is complete with ice-well and a shiny mirrored backsplash. It gives the bar that 1940s feel that was hitherto incongruous with the outdoors. This baby camper brings a speakeasy feel to picnics and tailgate parties, something that we didn’t know we needed until now.

The Devil Is in the Details

Having a classy bourbon bar on wheels is appealing enough. But, what makes the Woody so devilishly attractive is the meticulous thought that designer Brad Ford put into its every component. Bulleit Bourbon influenced the iconic color of the Woody itself. The inside ceiling is lined with repurposed bourbon barrels. Even the seemingly unrelated aspect of the interior leather was chosen to fit the smell, feel, and ambiance of the Bulleit experience. Bulleit bourbon inspired every minute detail of the Woody. It has made it a completely unique and must-see attraction.

See It for Yourself 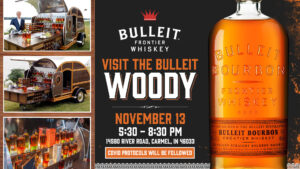 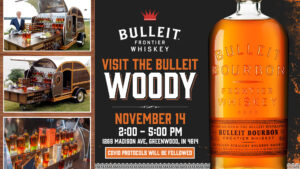 Because there are only two Bulleit Woodys in the world, experiencing one for yourself is a rare treat. Luckily for you, Payless Liquors is hosting a Bulleit Woody event on November 13 and 14 at its store in Indianapolis. Stop by to see this excellent piece of bourbon-inspired art for yourself, and taste some of the fantastic bourbons that Payless has to offer.

Scotch on a Tuesday? You don’t need an excuse to

Elegance for $9.99 Whether you want to have an ele